Mother’s Bistro & Bar has grown over the years from a charming 90-seat restaurant on Stark Street to a gorgeous 200-seat Portland institution in the Embassy Suites by Hilton Hotel. Chosen Restaurant of the Year by Portland’s Willamette Week, Best Comfort Food, Best Brunch, and Best Lunch Spot by numerous publications and one of America’s Top Restaurant Bargains by Food and Wine Magazine, Mother’s Bistro & Bar is now a destination spot for anyone who comes to downtown Portland.

Our welcoming grand entrance has plenty of room should there be a wait for a table and the adjoining bar with sparkling chandeliers and velvet upholstery beckon you to join us for cocktail. En route to our main dining area is our “family room” with a magnificent 14-foot African rosewood table which seats 20 comfortably. The bright window-wrapped dining room with sumptuous fabric-upholstered booths and banquettes, gold-tin trim, and beautiful wainscoting make you feel warm and comfortable as you settle in to enjoy your dining experience.

Finally, our extensive menu of authentic cooking from mothers around the world pleases even the most discriminating diner, leaving many wishing they could come back over and over to taste it all.

Lisa Schroeder is Executive Chef and Owner of Mother’s Bistro Bar.  She is a mother, grandmother, chef, restaurateur and author devoted to providing better-than-authentic renditions of traditional home-cooked dishes at her popular, award-winning restaurant.

In 1992, while juggling a marketing and catering career and raising her daughter, Schroeder realized there was no place that served the kind of food she would make if she had the time. She concluded what the world needed was a place which served “Mother Food” – slow-cooked dishes, such as braises and stews, made with love. From that moment on, Lisa was determined to open such a restaurant and spent the next eight years working toward that dream.

Schroeder soon gave up her business career and enrolled at The Culinary Institute of America. While there, she was selected as one of the Top Ten Student Chefs in America by Food and Wine Magazine. After graduating with honors in 1995, she continued honing her skills at two four-star restaurants in New York City – Lespinasse and Le Cirque. Her education continued with apprenticeships in Provence, France at Roger Verge’s Moulin des Mougins and at Mark Veyrat’s L’Auberge de L’Eridan in Haute Savoie.

In addition to this invaluable training, she toured France, Italy, Spain, Morocco and Switzerland where she gained an understanding of regional cuisine and indigenous products, affirming her belief that some of the best regional meals are not found in restaurants, but in homes, made by mothers. Searching for a new beginning, Lisa returned to the states and relocated to Portland, Oregon in 1998. She was the Chef at Besaw’s Café for two years while continuing to plan her restaurant-to-be.

In 2000, Chef Schroeder’s dream came true when she opened Mother’s Bistro & Bar in downtown Portland to rave reviews, receiving the “Restaurant of the Year” award from Willamette Week. In 2009, Schroeder released her critically acclaimed cookbook, Mother’s Best, and appeared on the Today Show, QVC and more. She is the recipient of the Portland Business Journal’s Businesswoman of the Year award, IACP Chef/Restaurateur Award of Excellence, National Restaurateur of the Year from Independent Restaurateur Magazine and the Woman of Achievement Award from the Oregon Commission for Women. Chef Schroeder nurtures her community as well as her guests. She participates in numerous charities and causes including Share Our Strength, Basic Rights Oregon, Americans for Gun Sense, Our House, the Raphael House and the Bradley Angle House.

Mother’s Bistro & Bar is blessed with an amazing, devoted, competent staff singularly focused on making your dining experience the best it can be. The moment you walk in our door you’re embraced by our commitment to provide the best possible service with a smile. From our cooks to bussers and servers to bartenders, everyone works together so you’ll have everything you’ll need and more. We work hard to make sure your glass is always full, your food is delicious, and everything is served hot and promptly.

Some staff have been with us for nearly as many years as we’ve been open. There’s Bryon Deisher who started with us as a busser at the age of 18 and is now our General Manager 16 years later, Jason Kastrup, our lead server (a.k.a. the “guest whisperer”) who knows what you want before you do, and a host of others who live to serve.

Would you like to join us? We’re always excited to work with energetic and talented people! 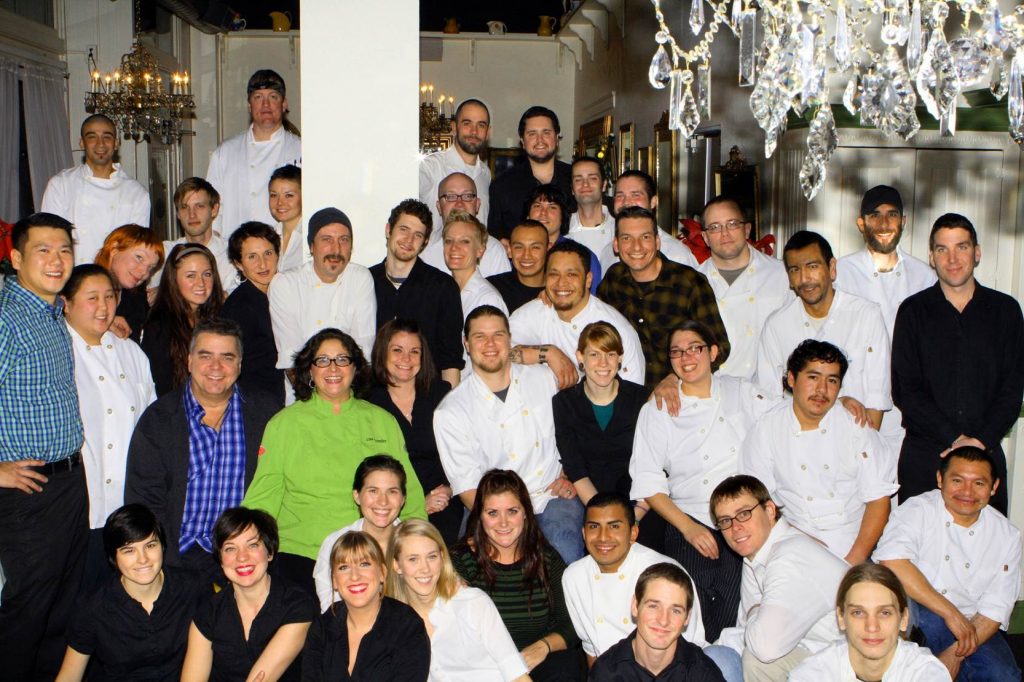 Do you have experience in the restaurant industry and looking for an exciting workplace? If so,send your resume to [email protected] and tell us little bit more about yourself.