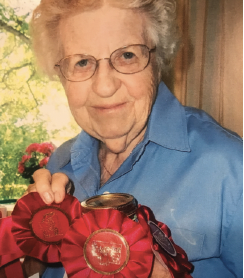 Betty Deem was born in 1921 in an apartment above the laundromat in downtown Medicine Lake, Montana. Her mother, Lydia, was one of 16 children whose parents immigrated from Denmark.

Betty grew up on a farm where they had a huge garden and raised turkeys, chickens and cows. Her mother taught Betty how to can every vegetable grown in their abundant garden and how to bake bread and cakes. Angel food cake was a family favorite for which Betty won the grand prize at the county fair every year.

After traveling and working in Alaska, Hawaii and Florida, Betty returned home to Northeast Montana and worked at the County Extension office in Plentywood. One day a handsome, tan young farmer came into the office to order trees for his shelter belt on the farm. “As I rolled a blank piece of paper into the typewriter to take his order, I asked his name. I blushed when he said ‘Arnold Lee’ as my friends had been telling me about a handsome bachelor named Arnold for quite some time!” Their first date involved shooting clothespins off a clothesline. From there it was square dancing and soon he proposed. Her answer was “yes, yes, yes!”

Wedding bells rang, and children came; boy, girl, boy, girl…just what they wanted. Like her mother, Betty provided for her family with nearly everything from the farm: flour from the wheat they grew, meat and eggs from the cattle and chickens, milk from the cows and all the vegetables one can imagine, including prize-winning potatoes.They even had beehives to provide honey!

Turning toward her children’s education and growth of the community, Betty became a Sunday School superintendent, a Boy Scout leader and a 4-H leader. The county fair flourished under her leadership and every booth was brimming with prize-winning produce, wheat sheaves, flowers, canned and baked goods. Betty entered something in the fair every year until she was 94, when she finally declared, “I think it’s time to let someone else win.”

One of Betty’s granddaughters, Jessica, lives here in Portland and used to work for Mother’s Bistro &amp; Bar many years ago. Jessica has always been inspired by her grandma’s home cooking and hospitality and enjoys passing it on to her son Kai. Sadly, Betty Lee passed recently at the age of 99, but her memory will live on through those who loved her and her fine cooking.