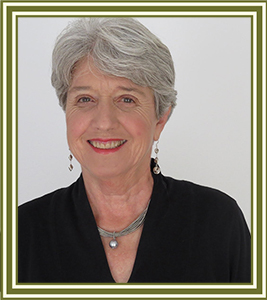 Mary-Michelle Upson Hirschoff, known to all as “Mikey,” grew up in Bellevue, Washington. Her love of fresh food began on her Finnish grandparents’ farm in the 1940s. As a small girl, she picked cherries right off the tree and helped raise chickens. Her mother, Maija, taught her to make the crowd-pleasing, oven-puffed Finnish Pancake, as well as American classics like waffles.

In 1960, Mikey received a full scholarship to Stanford University, where she majored in Political Science and studied abroad in France at age 19. The experience expanded Mikey’s culinary horizons, and she returned with a list of Parisian restaurant recommendations for her fellow Stanford students. Back at Stanford, she met Jon Hirschoff, who became her husband in 1964.

During Mikey and Jon’s first year of marriage, their favorite home-cooked dish was a shrimp recipe off the back of a Minute Rice box. All that changed when they got the chance to spend a year in Rome assisting Jon’s Yale Law School professor during his sabbatical. In Italy, they devoured Lasagna Verde, Saltimbocca, and other Italian classics. Their budget was so tight that Mikey crafted a Christmas tree by gluing together walnut shells, but fresh food was plentiful and affordable. She returned from Italy a chef.

Mikey entered Yale Law School the year after Jon graduated and later became the first woman hired as an attorney by a major Hartford, Connecticut firm. Her decades-long career spanned private practice, professorships, and “of counsel” positions. While practicing law and raising two children, Mikey achieved new heights of culinary success. Her dinner parties and Fourth of July celebrations have long been a coveted invitation in the New Haven community. She never takes shortcuts, making everything from scratch. For many years, she maintained a thriving garden; the whole family enjoyed picking produce so she could make her famous pies.

She taught her daughter and son to cook many of her classics. Before her granddaughter went away to college, Mikey hosted her for a two-day cooking marathon that included lessons in how to make fresh pasta and the perfect pie crust. At 77, Mikey is still cooking from scratch with fresh ingredients every day! She continues to do pro bono legal work for tree preservation, too. There’s no stopping this M.O.M.!