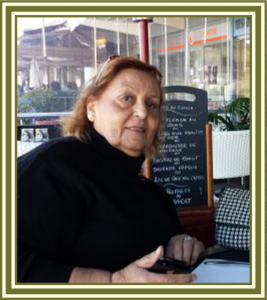 Mireille (pronounced Mee-ray) Salama Cohen is Chef Lisa Schroeder’s former-mother-in-law. She was born in Tangiers, Morocco in 1938. She married Albert at the age of 18 and went to live with him and his mother who taught her everything she knew about cooking. When Morocco gained independence from the French in 1960, Mireille and Albert emigrated to France, where they raised their two children.

They didn’t forget their heritage, however, and continued to cook the foods of their youth, from bisteeya to tagines. Everyone’s favorite (and most of Morocco’s, too) was couscous – not just the grain, but the slow-cooked stew replete with chicken, lamb, sausage and vegetables served on top of couscous, the semolina grain. Since it took all day to prepare, the stew’s aromas beckoned you to the soup pot to take them in. Once at the table, the enticing and exquisite flavors were always a welcome treat at family gatherings.

Mireille became Chef Lisa’s mother-in-law back in 1975. Both she and her husband Albert were great cooks and happily showed Lisa how to make their specialties. It did get a bit confusing, though – Mireille would show Lisa her way of doing things, and then Albert would proceed to correct her methodology and show Lisa his way. Between the two of them, Lisa learned how to make some of the delicious Moroccan dishes we are offering you this month.