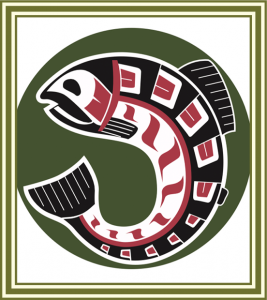 Those of us who live in the Pacific Northwest have a special relationship with salmon. It has nurtured us as long as we’ve been here. It’s part of our culture, heritage and central to the lives of many Native American tribes in this region. Six species of salmon (King, Coho, Sockeye, Pink, Chum and Steelhead) begin their life in our streams, head down river to the ocean, and then instinctively return to their birthplace to reproduce (spawn) and start the cycle over again. After spawning, the salmon die and become food for over one hundred other species, from eagles to bears and the forest itself.

This is the time of year salmon return to spawn, fattened from their time in the ocean, using all their energy to make it upriver to their natal streams. Unfortunately, the habitat of these amazing creatures has been decimated by dams, logging, pollution, climate change, fish farms and other factors, so they’re extinct in waters in which they’ve existed for millennia. While salmon can still be caught in Oregon, many swimming in our waters were born in hatcheries and released into the wild.

Alaska is the last pristine natural salmon habitat left on earth, and Bristol Bay has the largest sockeye (red) salmon population on the planet, with runs of up to 30 million fish. Natives and local fishermen alike depend on it for subsistence and their livelihood, and sports fishermen revere it for its abundance.

Sadly, a proposed copper and gold mine called Pebble threatens all this. It would be located near Bristol Bay, where all waterways are connected and what flows into one stream, creek or underground well flows into them all. The mine would create toxic waste that will last forever, and while they say it will create jobs, they’ll be much fewer than the thousands of jobs salmon fisheries provide.

This month, we celebrate the salmon and its gifts, in particular the red salmon of Bristol Bay. We truly hope that by eating wild salmon and sharing this story we may be able to save this very important natural resource which brings life and livelihood to many, and deliciousness to our table. Learn more and get involved: www.savebristolbay.org