A fabulous team dinner at Ox Restaurant wasn’t our only meal in Portland, oh no. We Urbered far and wide and had two more pretty great dinners in the city.

Olympic Provisons, which is lately calling itself Olympia Provisions owing to some squabble with the International Olympic Committee,mwhich I find hilarious. Are The Olympics really worried about a Portlandian meat emporium interfering with its brand? Ok, sports people. Whatever you say.

Our last night in town, we hit up Mother’s Bistro based on recommendations on Trip Advisor. This downtown bar and restaurant is much like what I’ve always imagined opening: multiple, intimate dining rooms furnished with a mix of homey antiques and crystal chandeliers, a menu focused on classic American dishes made in their ultimate iterations, and service so friendly and casual, you think you’re at a friend’s house. 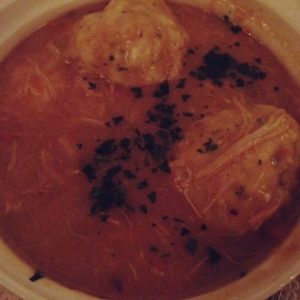 After a massive basket of rolls and biscuits to share and and a delectable cup of matzo ball soup dominated by a tender, slightly salty matzo ball – the tastiest one I’ve ever eaten – I dove into this gigantic bowl of chicken and dumplings. Imagine the best Thanksgiving gravy you’ve ever had. That’s what the sauce in this dish reminded me of – deeply flavored with roasted chicken and aromatics, well seasoned but not salty.

Lisa Schroeder, the “mother” at Mother’s, came out, and we all heaped praise on her. She’s doing something special and real and decidedly un-hipster in this town full of flannel, tattoos and ironic mustaches. Her food is hearty, nuanced but not tortured into submission, and well, really yummy. It’s not fussy, it’s certainly not neuveau, but you will leave Mother’s house full and happy. Enough said.