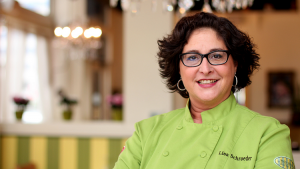 Mama Mia Trattoria and Mother’s Bistro & Bar chef and recently-teevee’d Mother’s Best author Lisa Schroeder has just been named Civil Rights Champion by the 2009 Oregon Bureau of Labor Industries. The official word on Lisa’s contributions to humanity: “she is one of the founders of the Bridges of Hope Campaign for the Bradley Angle House, honorary chair of the Our House Dinner Series, represents downtown small businesses on the Street Access For Everyone (S.A.F.E.) Committee and frequently donates her time to a variety of other local organizations such as Basic Rights Oregon, the Cascade AIDS Project and Taste of the Nation.” But it isn’t all do-gooding. ‘In 2006, the Portland Business Journal named Lisa Schroeder ‘Businesswoman of the Year.” Congratulations are in order. As is an apple crisp.
·Lisa Schroeder on the Today Show [Eater PDX]