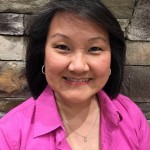 Carol Ono was born in San Francisco, California in 1962. Her parents were born in Hawaii, but met in San Francisco. Carol’s dad was an architect/design manager for Safeway and her mom was a homemaker. Her grandparents remained in Hawaii and Carol has fond memories of cutting and eating juicy pineapples in the fields at her father’s parents’ plantation when she was little. When Carol was twelve, Safeway’s division office moved to Fremont and the family moved across the bay. It was a bit of an adjustment, moving from the city to what was then the “country,” with cow pastures and crops.

Carol learned a lot about general cooking from her mother and a lot about Japanese cooking from her mother and grandmother.  Carol graduated high school in 1980 as valedictorian and earned a degree in engineering with honors at Santa Clara University in 1984. Before her senior year, she and her family went to Japan to visit relatives and astonished them with the sushi-rolling skills she learned from her mother. Upon graduation, Carol took a job with Amdahl Corporation as a software engineer, at a time when very few women were in the industry. Six years into her career, she got involved in a volunteer program through Amdahl, teaching computer science at a local elementary school. Carol always wanted to be a teacher and was thrilled to find a teaching job that had real-life applications. She loved the program and eventually became its director, overseeing over fifty volunteers. When Amdahl began to downsize, Carol decided it was time for a career change and used the opportunity to get a degree in elementary education and ESL.

Carol met her husband Jeff, a fellow software engineer at Amdahl, and they married in 1993. Just as Carol was finishing up her education degree in 1994, she became pregnant with their first child, so she chose to substitute teach after graduation. They moved to Portland in 1996 when Jeff’s company, Synopsys, transferred him to Oregon. Carol became a stay-at-home Mom and a second child was added to the family in 1998.

While Carol is Sansei, third generation American, there’s one tradition she was raised on and still observes today – celebrating Japanese New Year. Traditionally, neighbors go from house to house to spread the New Year’s cheer, each family putting out a huge spread, always containing fish (abundance), noodles (longevity), fruit (rebirth), and eggs (fertility). Carol puts out up to 21 dishes, always an odd number (for good luck), and always a lot!

Carol volunteers for many things. She was a Girl Scout troop leader for many years, helped run a Girl Scout summer camp, was a Cub Scout den leader, taught adult ESL through her church, ran Science Fairs, volunteered in classrooms, and taught advanced math.  When her daughter was nearing college age, Carol volunteered in the high school’s College and Career Center, which she continues to do so now. Her other passions include wine and cooking and she has taken many cooking classes over the years. She strives to make sure no one leaves her house hungry and with her great dishes on the menu this month, we’ll make sure you won’t leave hungry, either!