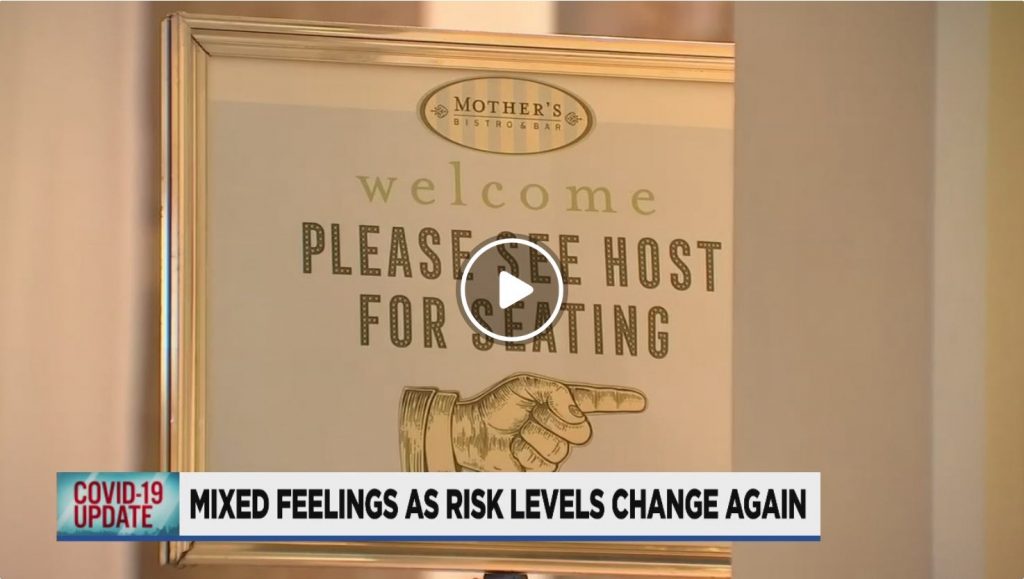 Click image above or watch full video on KPTV.com

PORTLAND, OR (KPTV) — If you had plans for Mother’s Day, chances are you’re dealing with confusion over whether you still have a reservation at a restaurant.

But on Tuesday, she announced as of this Friday, May 7 no counties will be in Extreme Risk.

This gives restaurants the green light for indoor dining again.

The back-and-forth is wearing on restaurant owners, like Executive Chef and Owner of Mother’s Bistro & Bar, Lisa Schroeder.

“I feel like I have whiplash. You know I feel like I’ve been on a rollercoaster, and I dread rollercoasters,” Schroeder said. “It’s been very tough. I’ve been very supportive of Governor Brown and her decisions. I think they’ve been science-based and show a sense of caring for the people she governs, but what happened these last couple of weeks leaves me baffled.”

Schroeder says her restaurant’s been closed since June 2020.

She says she’s been cautious and wasn’t going to reopen the restaurant until it could reach 50 percent capacity.

The restaurant was supposed to reopen on April 29.

“I had to make the call on the Monday of whether I’m going to order the food so that we can open Thursday or not. And I had my ear to the ground and it said nope she’s going to shut it down. And so we chose not to reopen our doors on April 29th and it was the right decision since indoor dining was shut down.”

Mother’s Day reservations she says that were booked solid were all canceled this weekend.

Schroeder says even though no counties will be in Extreme Risk Friday, there’s just not enough time to get everything up and running for Mother’s Day.

“In order to have food ready for a Thursday, we have to get the order in by Monday at 3 o’clock so it gets here by Tuesday, so we can start to make the stocks and make the soups and make the sauces. Everything we do here, we do from scratch. So to build up enough food to feed a few thousand people over a weekend, doesn’t just happen overnight,” Schroeder said. “To rev up and get everything ready for one day’s worth of selling, it’s just not physically possible. Plus, we have 60 employees that we were bringing back. When the governor shut everything down everybody started to make plans. Surgeries were scheduled, vacations were planned and we can’t all of a sudden bring everybody that we had scheduled for working last week to all of a sudden be able to show up to work in a day’s time.”

Schroeder is certainly frustrated by the constant changes over the last few weeks for county COVID-19 restrictions.

But she’s hoping this marks a turning point for our state.

“In two weeks to be from extreme risk to now ok now we can be closed, we can be open this I just don’t understand,” Schroeder said. “So now I’m starting to question the veracity of these decisions. You know I just hope that we’re on an upward turn and that this will be the last time any of us have to go through this indoor dining closure.”

She says the silver lining in all of this is that it gives her employees more time to get fully vaccinated and feel safe about reopening soon.